A grasshopper hopped around on the grass on a nice summer day. He was warm, content, and well-fed, chirping and humming to himself because life was good.

While the grasshopper was having fun, an ant was carrying grains and working hard to get to the nest.

When the grasshopper saw the diligent ant going by, he invited him to join him and share his joy.

The grasshopper would chuckle as he looked at the ant. He’d say things like, ‘Why do you work so hard, little ant?’ ‘Come in, relax for a moment, and listen to my music.’ Summer has here, and the days have become longer and brighter. Why squander the sun in toil and toil?’

“I am assisting in the preparation of food for the winter,” the ant said, “and urge that you do the same.”

“Why should we worry about winter?” the Grasshopper said. “We have enough of food now, and there is still plenty of time to prepare for winter.” The ant, on the other hand, was well aware of what he was doing and continued his toil.

The grasshopper chose to dance, sing, and play at his leisure than than work and prepare for the winter. He was unaware that the lovely summer days would not endure forever, and that cold and wet days would soon follow.

Summer gave way to fall, which gave way to winter. The sun was hardly visible, the days were becoming shorter, and the nights were getting longer. The weather turned bitterly cold, and snow began to fall.

When the chilly winter arrived, the grasshopper recognised the ant was correct and that he should have prepared himself. The grasshopper had lost his will to sing. When there was enough of food, he shouldn’t have wasted so much time. He was shivering and hungry.

He had not anticipated that this winter would be more severe than normal. He wouldn’t survive to see another summer since he hadn’t saved food for himself or assisted anybody else do so. He had nowhere to hide from the winter and died of starvation, while the ant feasted on the food he had saved and collected throughout the summer.

Moral of the tale: This story can have thousands of morals based upon your mindset. It’s on you what you learn from this story. If you work hard now, you will reap the advantages tomorrow.

“If you’re the only responsible person of your family, you need to deal with all the circumstances for your family. Being in present is a big present, but extemporaneous about future is the biggest mistake.” – KP 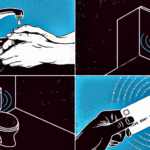 Using the Apache-2.0 ultrasonic sensor module, you can make ANYTHING touchless.