Turning is a machining operation that uses a single-point tool to create round components on lathes. To make complicated rotating forms, the tool is fed either linearly in a direction parallel or perpendicular to the workpiece’s axis of rotation, or along a predetermined route. The rotation of the workpiece is the primary cutting action in turning, while the feed motion is the secondary cutting motion.

The figure shows a schematic representation of a simple turning process, including the depth of cut d, feed f, and spindle rotation N in rev/min.

To decrease a part’s diameter to the desired dimension. Straight, conical, curved, or grooved workpieces such as shafts, spindles, and pins are produced using this method.

A lathe may be used to precisely create a smooth, flat face perpendicular to the axis of a cylindrical component. A smooth machined surface is created by feeding the tool radially or axially. Face grooving creates grooves for uses such as O-ring seating.

It does not entail the removal of any content. It is instead a metal forming technique used to create a regular crosshatched pattern (regular shaped roughness) on a cylindrical surface. It can be used as a grip.

Boring may be used after producing a hole to increase its dimensional accuracy and surface polish.

To expand an already created hole or cylindrical hollow, or to create circular interior grooves.

To create a variety of axisymmetric forms for utilitarian or aesthetic reasons.

To cut a portion off the end of a component, as is done in the creation of slugs or blanks for further processing into discrete products, is also known as cutting off.

Although the cutting tool has a basic form, the feed action is complicated; the cutting tool is fed along a contour, resulting in a contoured shape on the workpiece. Profiling necessitates the use of specialized lathes or equipment.

A thread can be made in a variety of ways using a lathe. Lathes are used to cut threads by advancing the cutting tool at a feed rate that is exactly equal to the thread pitch. A helical band, which is essentially a thread, is cut in with the single-point cutting tool.

What is the Mechanical workshop practice for mechanical engineering students? 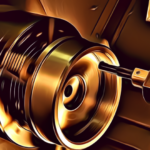 What are the important Nonconventional Machining processes?